As Boldies, like Kate Humble, ‘We all know simple things make us happy’

Bereavement, middle-age and a few ‘sod it’ moments led TV’s Kate Humble to embark on a year of simple joy and clearing the clutter.

Kate Humble is reflecting on the joys of getting older.

“Dahlias,” she exclaims. “When I hit 50, I suddenly thought, ‘I really want dahlias in my life.’ I don’t know why that happens, but apparently it does. I had no idea how to grow dahlias but luckily my friend Emma did know, and I’ve had enormous pleasure from my garden, from just weeding, growing things. Some things haven’t worked, but that doesn’t matter.”

This ‘not mattering’ when things don’t quite work out is a recurring theme, as Humble and I talk over the phone. The TV wildlife and conservation buff (she’s best known for the likes of Springwatch and Curious Creatures, popping up as wildlife correspondent on The One Show and, more recently, A Country Life For Half The Price) has a new book out – A Year Of Living Simply: The Joys Of A Life Less Complicated.

“One of the other things I’ve realised as I’ve got older is, there really is no such thing as failure. Some things don’t work, or don’t turn out the way you want, but the failure is not giving them a go,” Humble, now 51, continues.

“The only thing I hope I don’t go to my grave saying is, ‘Oh, I wish I’d done that’, you know? It’s all about allowing yourself to try things, just try them, and if it doesn’t work, or you don’t like it, it doesn’t matter. You now know what makes you happy and what doesn’t.”

This “had been rumbling away for me” for a while, London-born Humble recalls, “and it’s probably a middle-age thing or something like that” – but a series of bereavements early last year “brought it into focus”.

Within six weeks, she lost her dad, father-in-law and a couple of dear friends. Alongside the grief and “tangle of emotions”, she was “kicked up the bum” by it.

“They were all of an age where people die – all in their 80s and my father-in-law was 90 – so these weren’t tragic deaths, but they were a timely reminder that life is finite,” she says. “That we have one crack at it, and if we don’t do the things, if we’re not true to ourselves now, when are we doing to do it?”

The power of simple joys

So Humble embarked on her year of living simply – but this wasn’t at all about stripping life back to bare basics for the sake of it.

It was very much about the inviting in of more of the things that brought genuine joy or captured her curiosity: more time in the cabin (Humble and her husband Ludo’s cabin in the Dordogne, France, surrounded by forest and aside a private lake – “absolute heaven” – is available to rent too), more rambling walks with the dog in Wales, more lingering, off-grid, toast-filled mornings and afternoons snuggled with books, or kneeling in the dirt in her garden.

She also took steps to level up skills that aligned with things she already knew were important to her – like learning to ‘make do and mend’ a little more. Humble doesn’t do things by halves though, so as well as discovering real reward in the likes of learning to repair her own clothes and get creative with the gluts of veg from her garden, she also headed to New Mexico for a few weeks to learn about building Earthships (uber eco-homes, where everything from the materials used to the water involved, is recycled).

“I was basically a 51-year-old builder’s mate. I was really interested in the concept and found out they [an Earthship community near a place called Taos] had an intern programme and I thought, ‘Sod it’. I don’t know how to build, but I phoned them up and said, ‘Will you take someone A – as old as me, and B – as unqualified as me?’ and they said, ‘Yeah, sure’.

“I really surprised myself with what I was able to do,” Humble adds. “It doesn’t mean I could now single-handedly build a house, but I could do something constructive if I ever do build a house, which is something I’d really like one day. It really surprised me that I was actually more useful than I thought I was, and I could be a bit more self-sufficient than I thought I was. There is something really pleasurable about that.”

Finding your own path

Of course, for many, these themes will particularly resonate right now. Humble agrees lockdown might have triggered lots of us to ponder priorities and connect more with the notion of simple joy. “I mean, given people’s reaction to lockdown and what they did with their time – you couldn’t buy yeast for love nor money! Everybody wanted to bake bread. Suddenly it felt like everybody realised that being outside was the most wonderful, life-affirming thing.

“I think it’s inherent in all of us, that these simple things make us happy,” she continues, “but our lives have become so crowded and cluttered with other things. And with the way life’s so consumer-driven, we’re encouraged from the moment we’re born practically, to buy things and have things and to accumulate stuff… You work harder and harder and harder to get more money and more stuff, because that’s what’s going to make you happy, when actually, the opposite is true.”

Humble may be a beekeeper, farmer and nature nerd but she’s adamant she’s “not a paradigm of simple virtuousness” (she is, though, as authentic and engaged on the phone as she is on TV, whizzing through animated sentences peppered with swearing and witty asides). And she’s not out to bash anyone for having priorities and pleasures different from her own.

“It’s not about a ‘should’ or ‘should not’, or about one thing being bad and another thing being good, life isn’t like that. But it is just about honesty, and more importantly, giving yourself space and time to understand what it is that makes your heart leap. And that might be going to the pub with your mates; there’s nothing wrong with that. It might be having a cupboard full of shoes.

“It might also be having some seeds in a pot on your kitchen window and seeing them come up. It might be just curling up with your best mate, with no telly, no phone, and just sitting on the sofa having a giggle. It might be going and picking blackberries.”

Neither is she suggesting we all pack in our jobs and live off homegrown courgette forever – remember, it doesn’t have to be all or nothing. 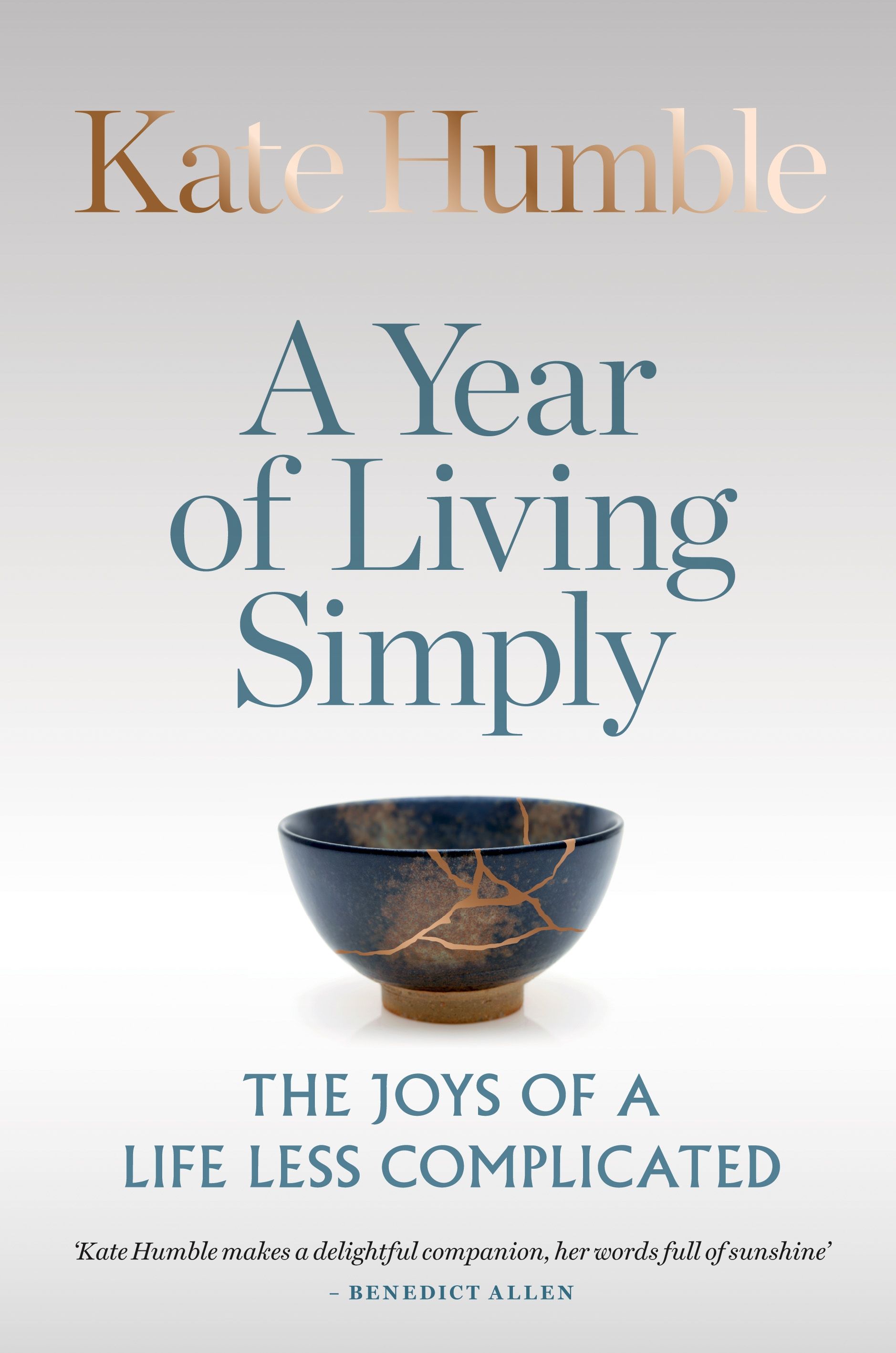 A Year Of Living Simply: The Joys Of A Life Less Complicated by Kate Humble is published by Aster