In 1789 the Bastille was stormed; in 1933 the policy of forced sterilisation began in Germany; in 1965 the first image of Mars from Mariner 4; in 1983 Mario Bros was released in Japan and in 2014 The CoE voted in favour of women becoming bishops. Read about Rawya Ateya who was the first female parliamentarian in the Arab world in 1957

Rawya was born on the 19th of April, 1926 in Giza, Egypt, 4 years after Egypt was declared independent from British rule. Britain still had a presence, particulary retaining control of the Suez Canal Zone. Being born into a politically active family she participated in demonstrations and was injured during the anti-British protests in 1939.

At the age of 30 she became an officier in the Liberation Army - the first woman - and was involved in the Suez War where she assisted in the training of first aid and nursing to 4000 women. Gamal Abdel Nasser was the Egyptian President from 1954 to 1970 and it was in the 1956 Constitution that he enabled women to be elected to office.

The first elections took place on the 3rd of July and Ateya was elected in the Cairo constituency despite the "...strong resentment for being a woman.". Having a strong religious education as well as her military background she was able to argue on both religious grounds as well as experience that she was the right person for the job. 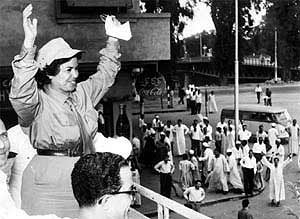 She was in office for 2 years during which time she obtained maternity leave with full salary for female workers, presented a law abolishing polygamy (didn't pass due to rural district opposition) and championed women's rights in general.

She died in 1997 at the age of 71 and is still honoured throughout the Arab world for her contribution to feminism in the region. In 2007 to celebrate the 50th anniversary of her election a ceremony was held at which the first female MP (Lateefa Al Gaood from Bahrain) and first female cabinet minister (Nada Haffadh from Bahrain) in the Gulf region were present.