On This Day 2 July

In 1901 Butch Cassidy and Sundance Kid rob a train; 1932 FDR coined the New Deal and in 1937 Amelia Earhart disappeared. The first Walmart opened in 1962 and in 1997 Bank of Thailand caused the Asian Financial Crisis. Learn more about the nuclear tests in Moruroa Atoll, the first which took place in 1966

Moruroa is part of French Polynesia in the Pacific Ocean, about 1250km from Tahiti (about the same distance as London to Madrid or Vienna to put it into context). It was known as Hiti-Tautau-Mai by the Polynesians, although there is no evidence it was inhabited. 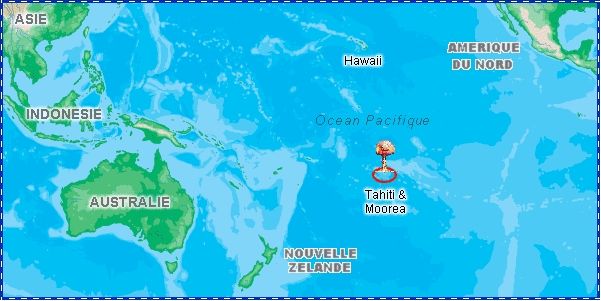 On the 2nd of July 1966 France conducted its first nuclear test with a plutonium fission bomb being exploded in the lagoon. Greenpeace report that the explosion took in all the water from the lagoon, dead fish and mollusks raining down on the atoll and the contamination reaching as far as NZ and Peru.

The United Nations adopted the CTBT (Comprehensive Nuclear Test Ban) which was to be signed in 1996. In 1995 France took the decision to run a series of tests in September and October resulting in global protests and embargos. It was also, if memory serves correctly, part of Etiennette Fennell's classes in French where the class got to write a letter to the French Government from Australia. This was done the world over as you can see below too:

The test site was eventually dismantled following the last test in 1996, with the atoll still being protected by the French Forces.

View of an underground nuclear test