Richard Branson: ‘I’m pretty fearless and have always had an adventurous streak’

The Virgin magnate tells TheBoldAge why he still feels like a 25-year-old at heart.

World-famous entrepreneur, business man and activist Sir Richard Branson started his own magazine aged 16, and went on to found his Virgin Group – which counts records, an airline, hotels, trains, finance and a mobile network in its portfolio of successes.

But he’s just as famous for his hair-raising adventures as he is for his wealth, having completed several world record attempts on water and in the air in a hot air balloon. Next year, he hopes to achieve his ultimate aim – to become an astronaut and going into space.

The 68-year-old candidly detailed his triumphs and failures over the last 20 years in his second autobiography, Finding My Virginity, a follow-up to his first book, Losing My Virginity.

Here, he opens up about his health, the freedom his wife gives him and how he wants to be remembered…

How do you look after your wellbeing?

“I think that’s important for wellbeing, because if you’re the kind of person that gets cross or jumps down people’s throats, it’s going to affect you as much it affects the people you’re angry with.

“I like to think of myself as a fairly calm person who absolutely loves others, and loves learning from them. Taking that approach in life helps you sleep well at night.

“My mum told me, ‘Never look back in regret. Move on to the next thing’. That’s served me and helped me to re-frame challenges as opportunities, which is a positive way of looking at life.”

How do you take care of your health?

“Every day I spend at least an hour walking, playing tennis, cycling, kite surfing when I’m on Necker Island [his private island in the Caribbean] and skiing in winter. I’m up at 5.30am for my workout to ensure that by breakfast, the endorphins are well awake, and I’m ready to achieve anything.

“My children, Holly, 35, and Sam, 33, hold the Virgin Strive Challenge every year, which raises funds for charities. I take part and it’s pretty extreme. This September we’ll hike across Sicily, row to Sardinia and hike across it, row on to Corsica and hike across that, then canoe to Italy. After a 2,000km bike ride, we’ll then climb Mont Blanc.

“I have to ensure I’m fit enough to take part – last year I was roaring up hills on bikes and overtaking 20-year-olds!”

Do you feel your age?

“I certainly don’t feel my age yet, but I’ve noticed I’ve aged when I see old TV footage of myself. I never thought it would happen to me. Luckily I still feel fit and like a 25-year-old. If you look after your body, you can avoid the ageing process to an extent.

“Obviously there’ll come a time when injuries start happening and you have to accept that nature wins in the end. I expect when I enter my 70s, I might slow down a bit, but until then, I’ll continue to throw myself into everything. My life’s about challenges, whether it’s trying to balloon around the world or be the fastest boat across the Atlantic, or whichever new one’s ahead of me. I like to pretend I’m still a teenager.”

What’s your next adventure? 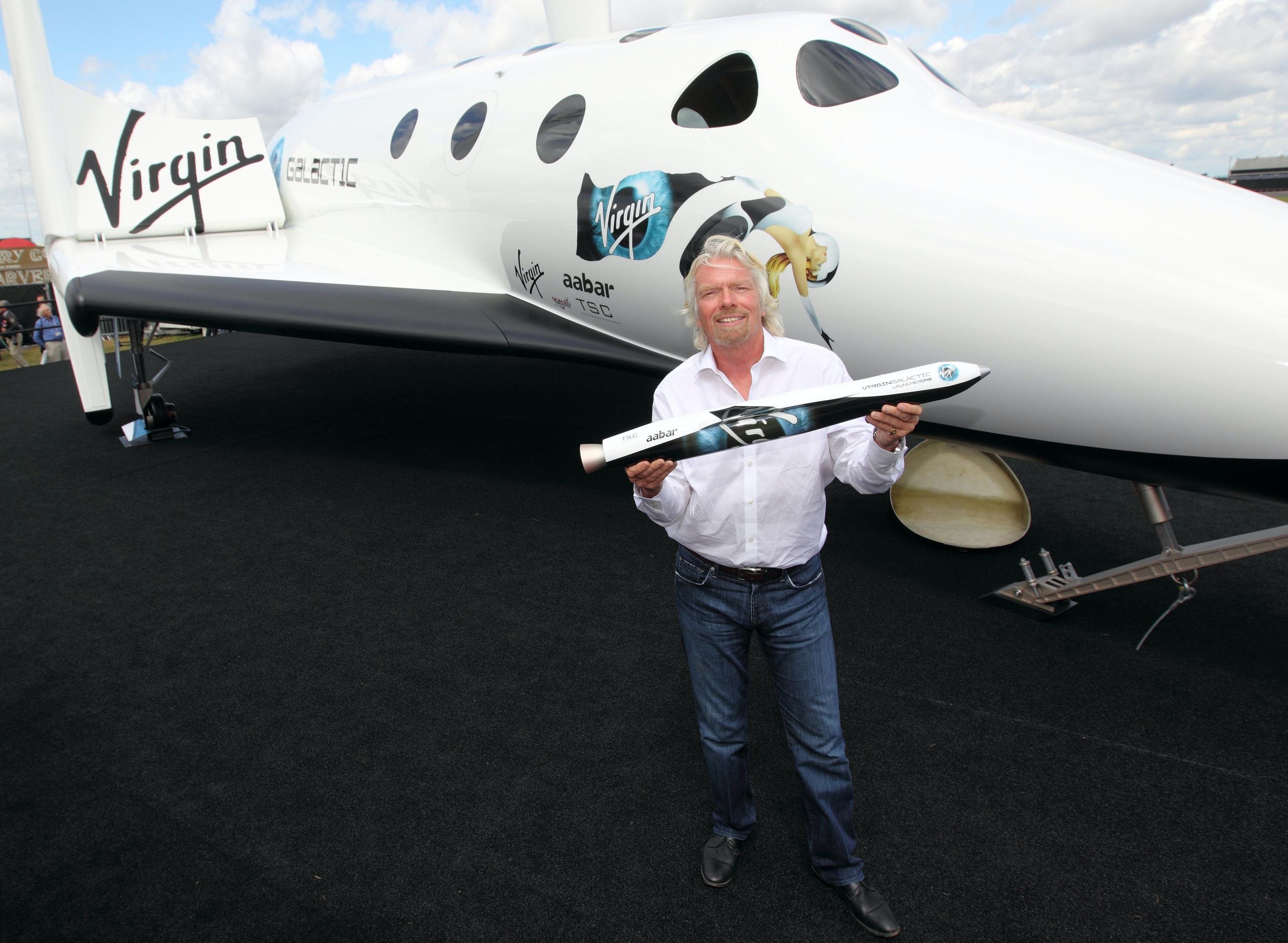 “I think our spaceship will be in space this year, and my guess is I’ll go up early next year. Other people will then follow later in the year. There’s a jokey saying, ‘Rocket science is difficult’, and over the last 14 years of trials and tribulations of building a spaceship company, I’ve found that it’s not a joke – it’s all too true. When we’re finally there it will be very satisfying. I’m sure Virgin Galactic will take tourists into space, but more importantly, we’ll be able to expand our understanding of the universe.

“It’s going to be quite an extreme event for one’s body, as you’re exposed to the maximum forces of gravity a human can withstand. I’m in training and hope to be a well-trained astronaut by the time I go.”

You love adventure, but do you ever get scared? 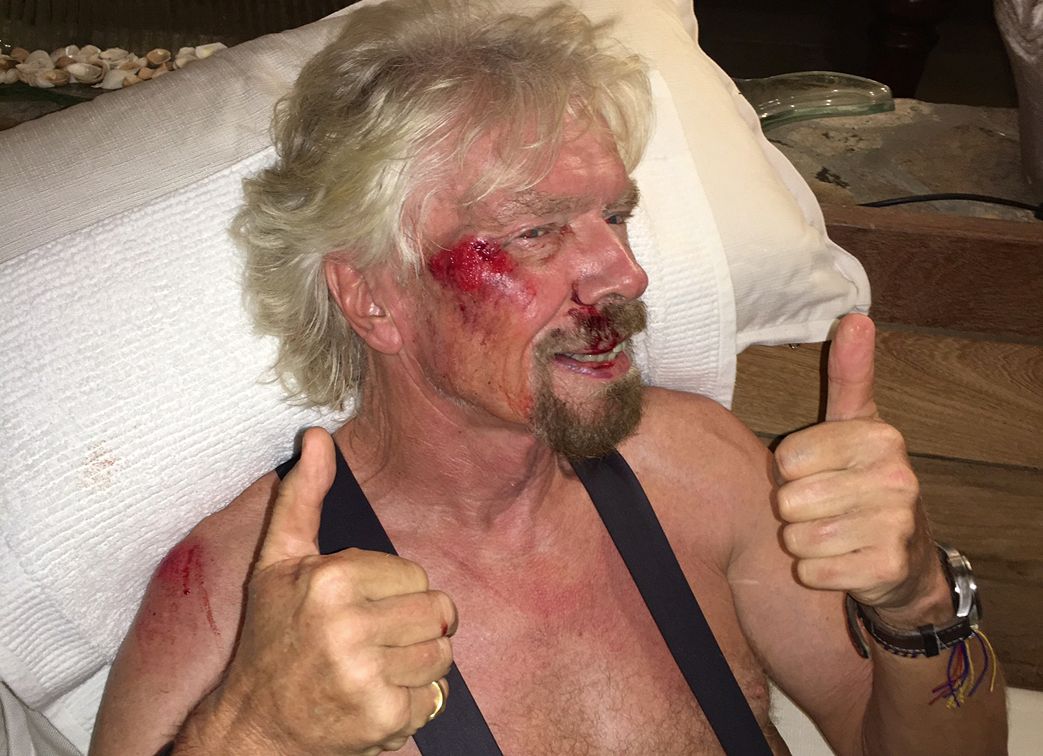 “I’m pretty fearless and have always had an adventurous streak. I’ve detailed in my book, Finding My Virginity, the 76 near-death experiences and close shaves I’ve had in my life. They range from balloon crashes to being in our home on Necker Island as the strongest storm ever to hit the Atlantic destroyed the island around us. 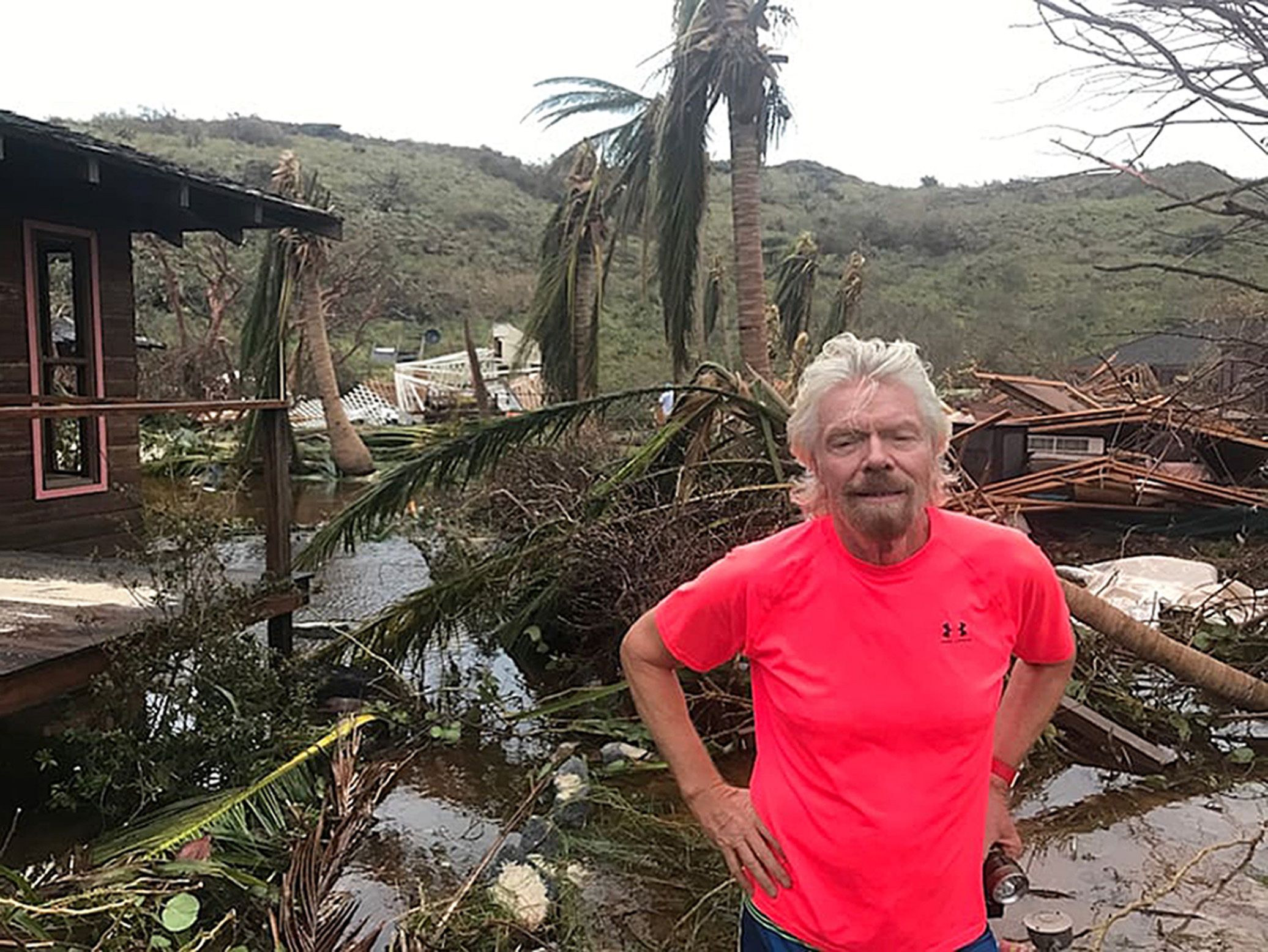 “In 2016 my life truly flashed before my eyes as I went over the handlebars of my bike while cycling on one of the British Virgin Islands. My bike disappeared over a cliff and I was lucky to escape with a cracked cheek, torn ligaments and cuts and bruises. It did make me think about my end a little more and about my ‘legacy’ – a word I’ve never really liked.

“I’ve realised that when I’m on my death bed, I just want to feel as if I have loved and been loved. I want to be remembered for changing business for the good, making Virgin a fun place to work, for pushing the boundaries of what people think is possible and leaving the world in a little better shape than we found it, for future generations.”

What’s the secret of your happy marriage with wife Joan?

“Joan and I have loved each other unreservedly for 42 years, so we’ve been very, very lucky. I definitely wouldn’t have achieved all I have without her. We get on really well together. I knew as soon as I saw this lovely Glaswegian girl that she was ‘The One’. Neither party in a relationship’s ever going to be completely perfect, but we look for the best in each other, which is key. Then hopefully you can have a great life together. 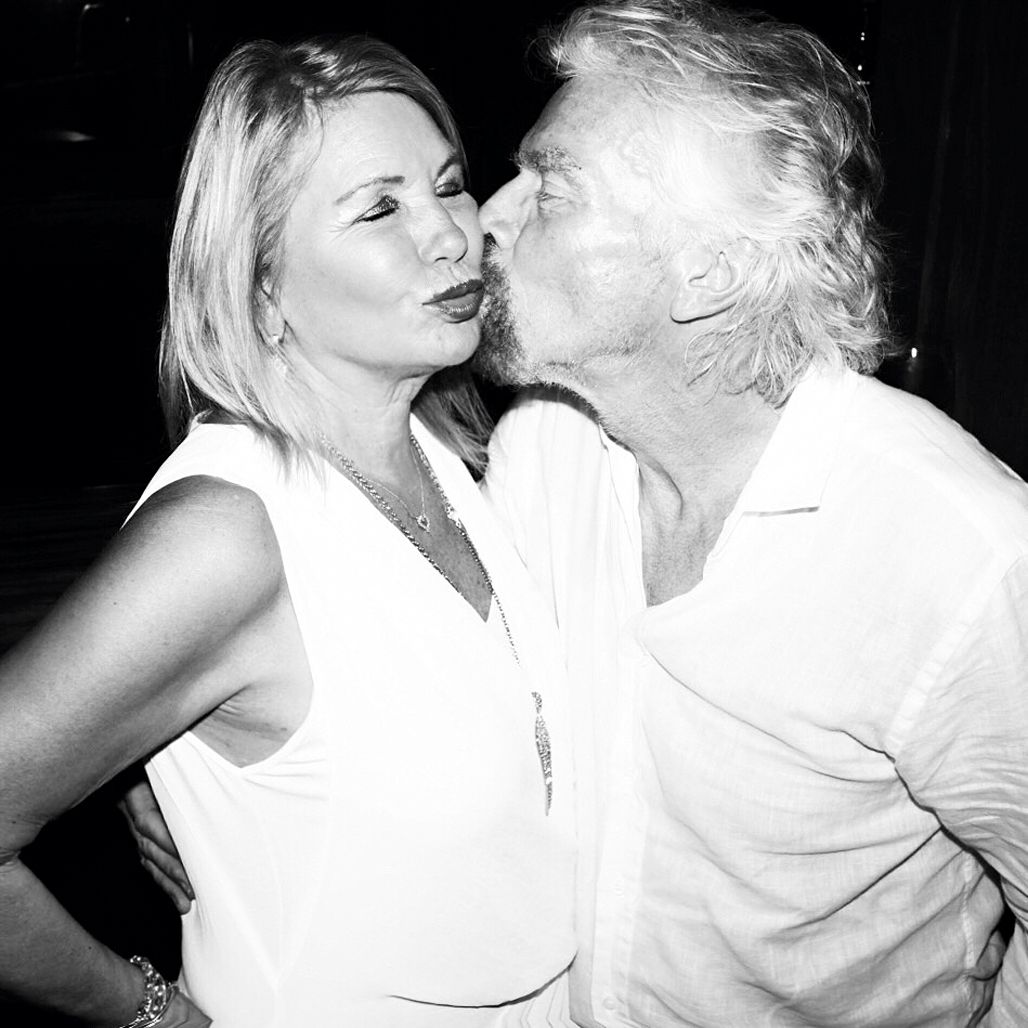 “We’re complete opposites, which may have helped, as she doesn’t do all the sporting events that the rest of the family do. I say ‘yes’ to everything and just love new experiences, new things and new people, whereas she’s somebody who doesn’t particularly like new things or new experiences.

“I can travel the world, while she has her own friends and is an avid reader. We have a fundamental trust and don’t smother each other, which is very important. There’s also that realisation of how important it is for the kids and your friends to have a solid relationship in the middle of a family. It’s well worth fighting to keep.”

What do you worry about? 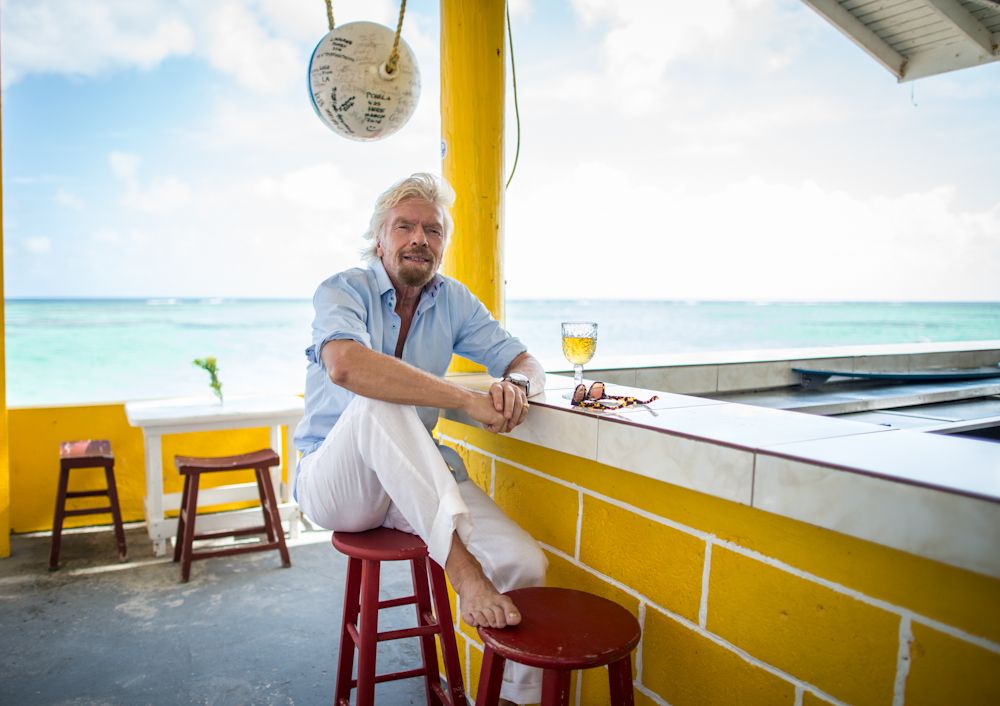 “I worry a little that I have slightly more forgetfulness than when I was younger, especially short-term memory loss. My dyslexia has always meant I’m bad with names and terms, but I do worry it’s getting worse. It could be I have a very full brain with lots going on, and it could be that it’s my age. Fortunately, my habit is to always make lists and notes of everything, so that I don’t overlook anything.

“Overall, though, I don’t honestly think about those sort of things too much. My approach has always been not to waste a minute of life, throw yourself wholeheartedly into it and to continue to live it to the full, until the body can no longer do so.”

Has there been an event that rocked your world? 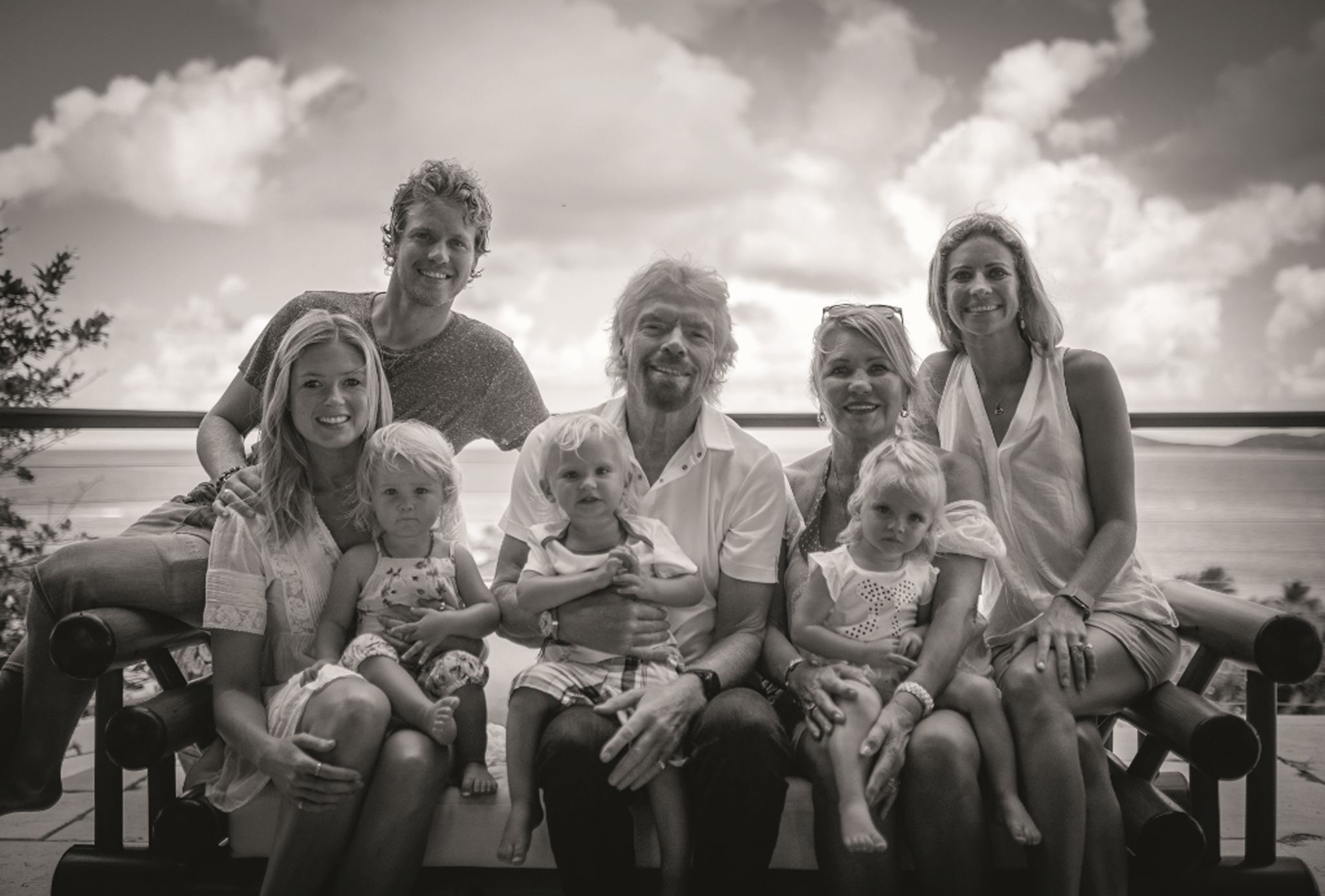 “I’ve been lucky. I’ve had a lot of exciting events in my life, but on a personal level, nothing beats becoming a ‘grand-dude’ to four beautiful grandchildren, aged three and two.

“That was the biggest event that rocked my world since having my own children, Holly and Sam. In the end, everything comes back to your family and friends. That’s the most important thing for all of us, and it puts life in perspective when you boil everything down.”

Finding My Virginity: The New Autobiography by Richard Branson is published in paperback by Virgin Books (penguin.co.uk)