They may be the biggest nuisance at summer barbecues, but wasps are also of great benefit to the garden – but how so? A top entomologist reveals all.

It's that time of year again when the summer begings to warm up, hopefully, and we beging to see a rise to a rise in wasp numbers, while warm weather causes, fruit – the wasp’s favourite sugary meal – to ripen.

We are all painfully aware of how much of a nuisance these yellow and black critters are when we’re trying to have a civilised summer barbecue, as we attempt to swat them away and send drinks and food flying in the process.

But don’t diss the wasp too much because:

Wasps are good for the garden 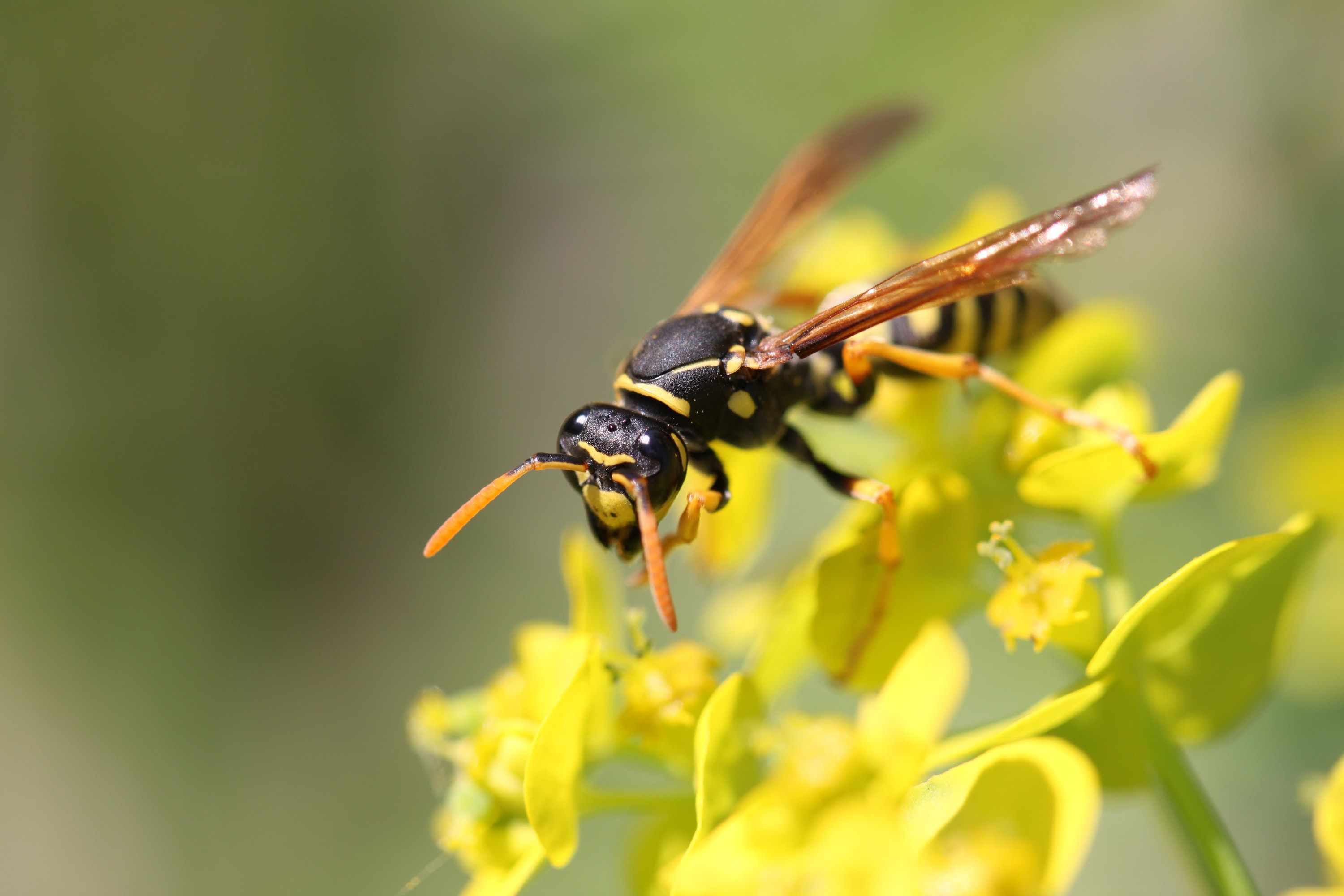 Wasps are hugely beneficial to the garden, says RHS principal entomologist Dr Andrew Salisbury. “The social wasps are hugely important beneficial predators – the grubs in the nest need to be fed a protein diet and that is other insects. Caterpillars are a favourite.

“I have watched them remove every single cabbage white caterpillar from a patch of nasturtiums, and we have had reports of them feeding on box tree moth caterpillars. They come in, sting the caterpillar, remove the head and fly off with the body to feed the grubs.”

Not only do wasps play a vital ecological role in that they control the numbers of potential pests like greenfly and many caterpillars, they are also valuable pollinators. 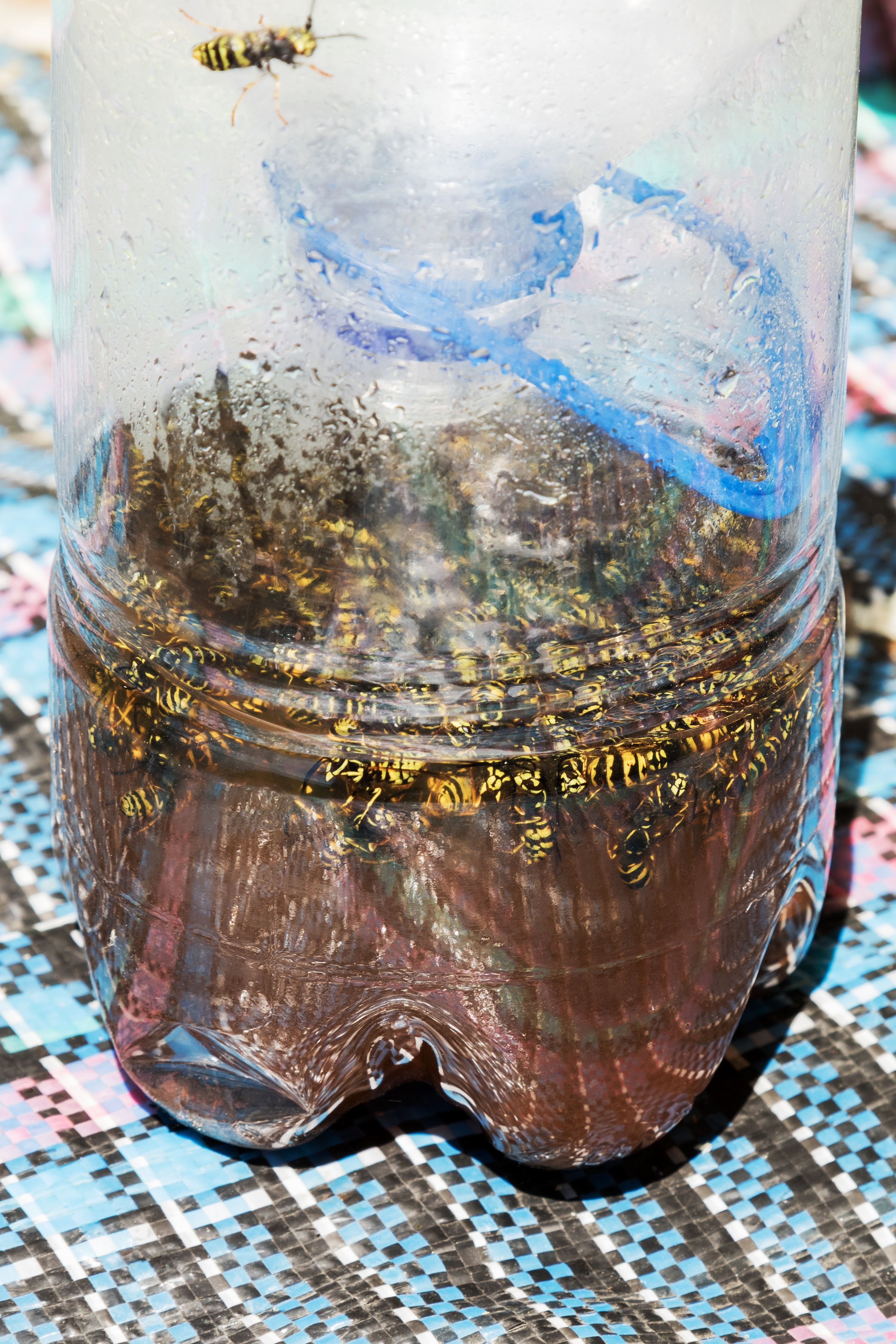 There are so many traps on the market which capture wasps, but they can make things worse, says Salisbury – the signals they give off when trapped can attract even more waps to the same site.

“Like most insects, wasps rely heavily on volatile chemicals (odour). They are individually able to detect (‘smell’) food, without necessarily needing to communicate with each other to indicate where it is.

“Visual cues are also likely to be used, as is contact chemotaxis (tasting). Wasps will also release volatile chemicals (pheromones) which can signal to others.”

“Wasps can release alarm pheromones when they think they are being attacked, so flapping about or swatting will cause this. It will induce defensive behaviour and makes them likely to sting.”

There are good wasps and bad wasps 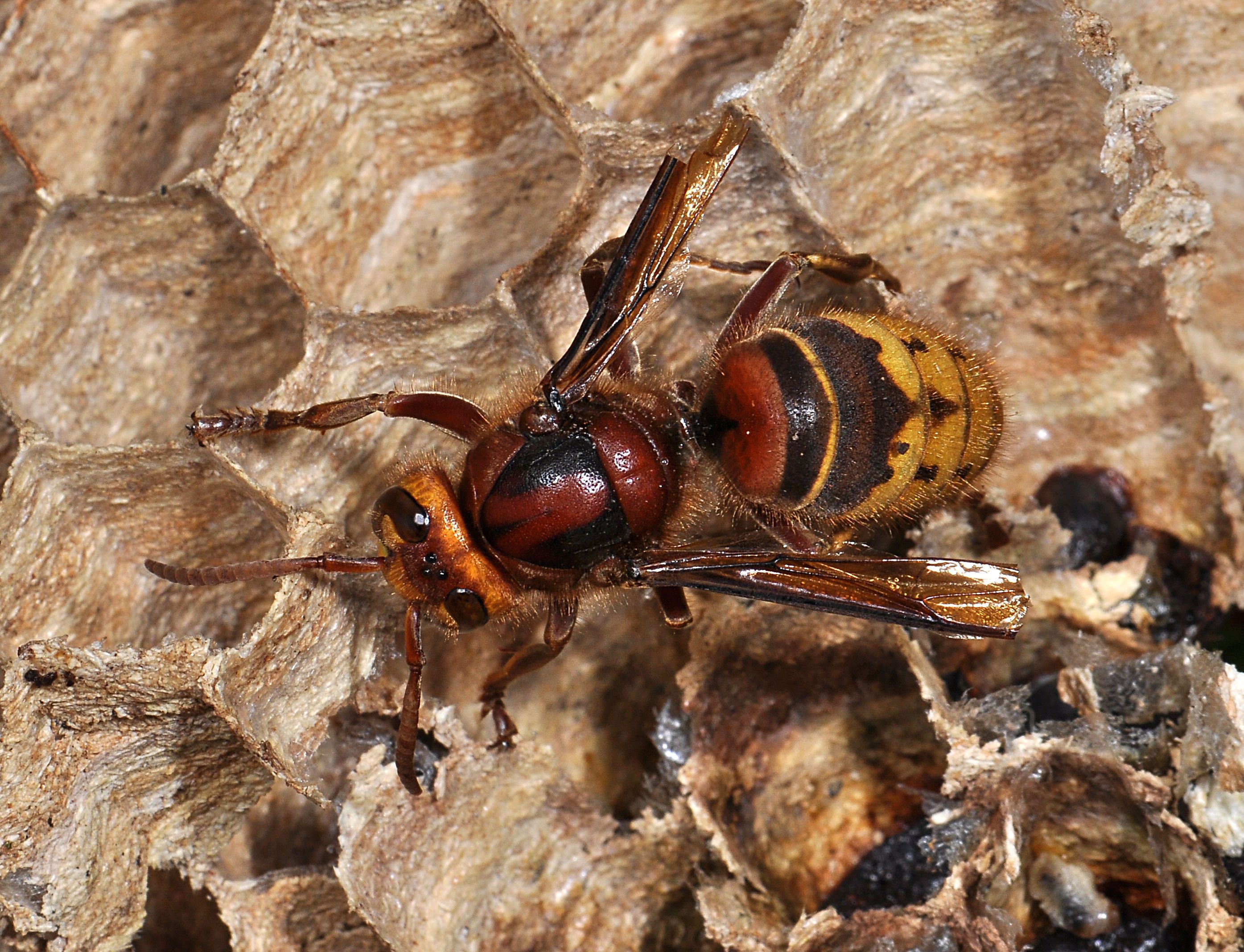 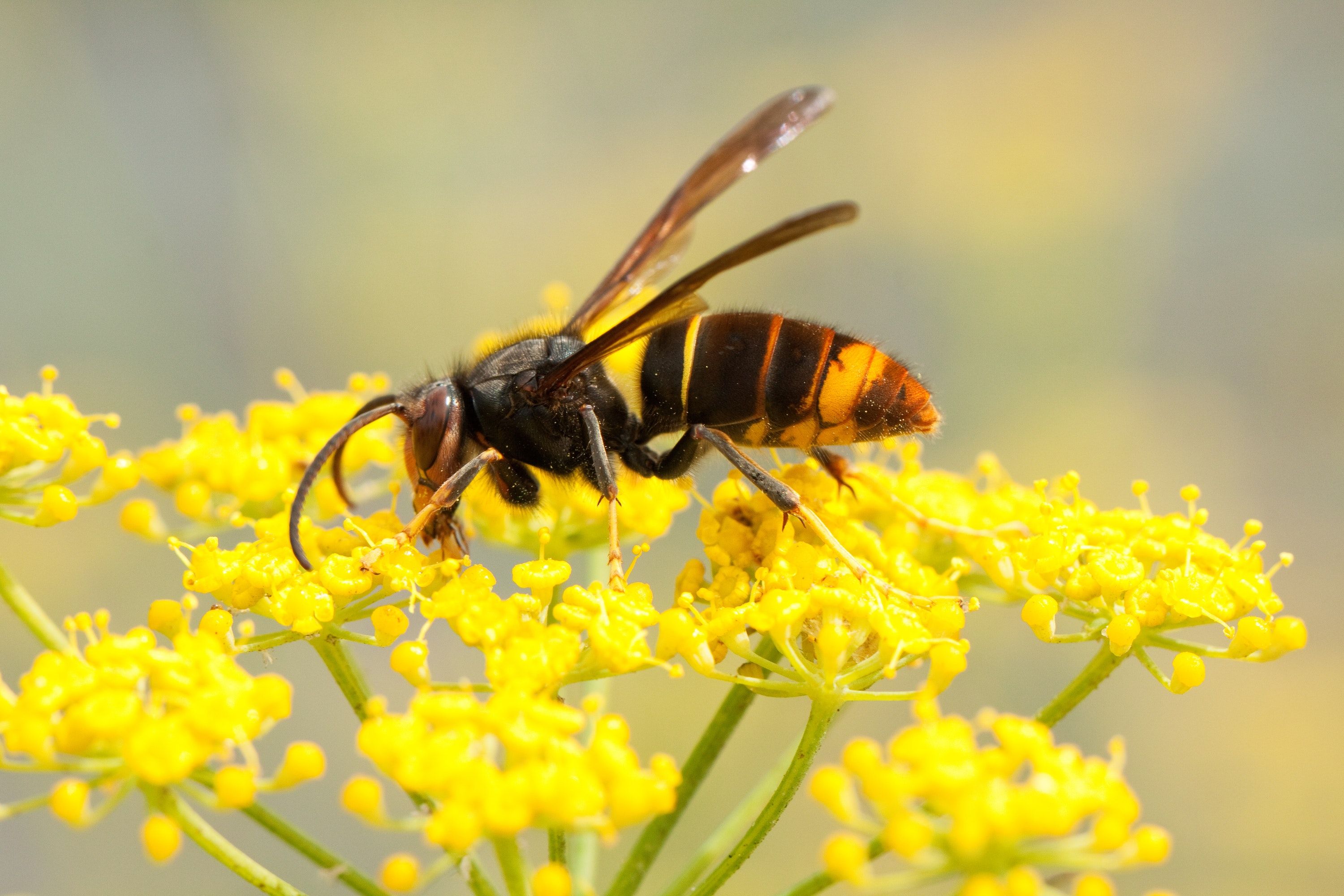 The Asian hornet (Vespa velutina), however, is an invasive non-native species which arrived in France in 2004 where it spread rapidly. According to the Great British Non-Native Species (nonnativespecies.org/home/index.cfm), affiliated with Defra, it’s a highly effective predator of insects, including honey bees and other beneficial species, and can cause significant losses to bee colonies.

It has only one yellow stripe on its abdomen whereas the native hornet has several yellow stripes. Although sightings are rare and have so far been confined to Devon, Somerset, Gloucestershire and Lancashire, anyone who believes they have found a nest should not go near it and report it to the Non-Native Species Secretariat at alertnonnative@ceh.ac.uk. 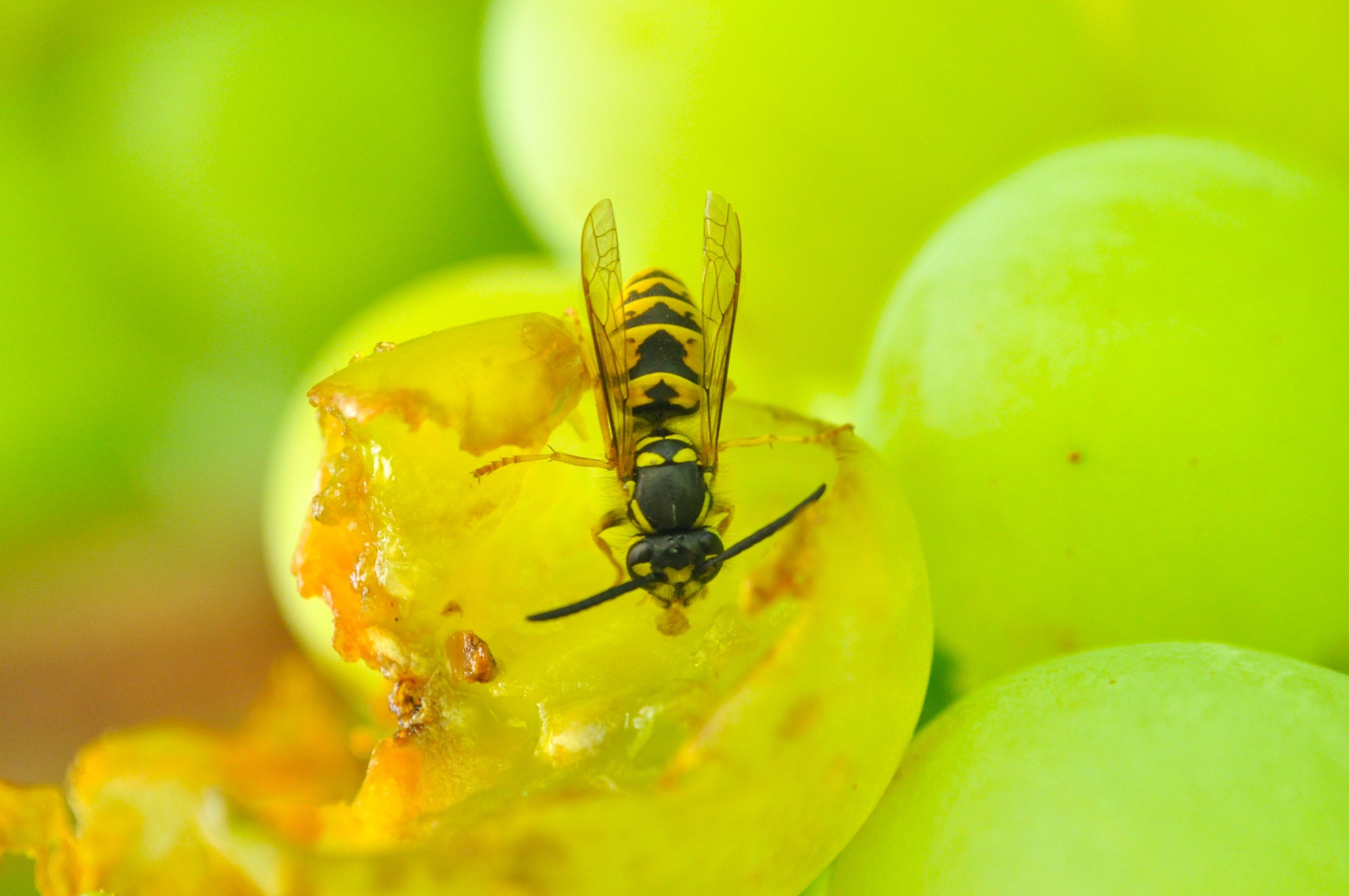 If wasps are damaging your fruit, reduce the risk by enclosing some of the fruit trusses in bags made from muslin or nylon tights.

Fix wasp-proof screen over greenhouse doors to protect grapes and if you’re going down the trap route, half fill a jam jar with water and jam, put a sheet of paper over the top of the jar, secured with an elastic band and punch a hole in it with a pencil to allow the wasps to enter – but not escape.

The RHS notes: “A wide variety of wasp traps are also available from garden centres and hardware stores, although it is not clear if these traps reduce wasp numbers locally or attract more wasps from further afield.”

And if the worst comes to the worst, eat your barbecued food indoors.